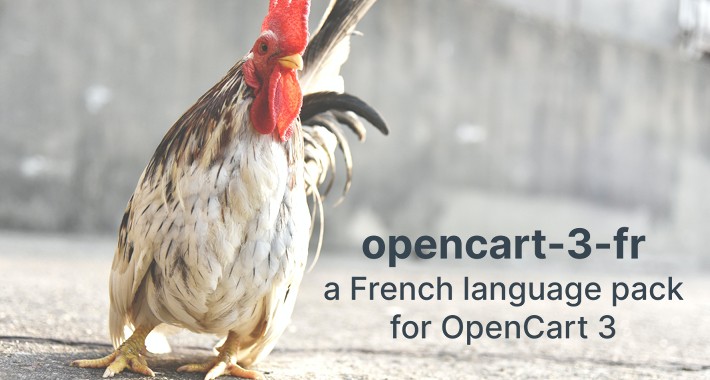 opencart-3-fr is a French language pack for OpenCart (from version 3.0.2.0). This pack brings together translated files for a French localization of the administration interface (backend) as well as the online store (frontend).

This project succeeds to opencart-2-fr, developed and maintained from 2015 to 2018, but most of the translations have been completely reworked from scratch.

This language pack has been developed with some basic principles in mind:

- idiomatic translations: translation strings did not have been automatically generated, but by understanding the context in order to draft an appropriate formulation
- native utf-8 support: accented characters and typographic signs use standard utf-8 encoding
- proper typographics usages: typographic rules and practices used in the French language redaction (thin spaces and punctuation marks in particular) are respected
- understated technical jargon: technical references are translated in the most understandable manner possible
- gender-neutral formulations: in order to be as inclusive as possible, translations preferably use language that does not use the gender of users or visitors

Unlike the project that preceded it, this language pack is available in two different variants, both developed from a single common platform.

1. the free variant (hosted on GitHub) contains all the files necessary for the basic running of an OpenCart store: it should be sufficient in most cases
2. the full version (available on OpenCart Marketplace) contains additional files required for translating various extensions related to proprietary services: payment gateways, shipping methods, etc.

This distinction is due to several factors:

The files only included in the full version are listed in an specific document (cleavage.csv in the docs folder).

To watch this language pack in action, you can visit the demo site. Access to the online store (frontend) is not restricted, but to observe the rendering in the administration interface (backend), you will need to log in with the following limited guest access:
- user name: guest
- password: public.guest

Full documentation is available in both English and French in two README files located in the docs folder.